The coastal waters surrounding the Outer Hebrides are recognised as being amongst the most pristine in the world, and to reflect this, they have been given the highest quality classification available by SEPA (Scottish Environmental Protection Agency). The sea is rich in vital minerals. In fact, it contains 83 elements of the periodic table. Hebridean Spa uses Hebridean seawater in the skincare range. The seawater used is collected from the surf as the waves break on one of the many beautiful island beaches.

People have always been mindful of water, as it is at the heart of all living matter. Historically, on the Hebridean Islands of Scotland, great importance was attached to locations which held water. In particular, certain natural springs were noted for different healing and therapeutic properties. These locations always emanated a sense of beauty; but people were also aware that they were special spiritual places, endowed with magical virtues which could bring health from the heart of the earth.
Ishga cosmetics use water from one such historical Hebridean healing spring in the manufacture of all the products in the skincare range. The spring used is situated in a beautiful remote location among the hills and lochs on the Hebridean Isle of Lewis. This particular spring is a lively spring with a bottom of blue clay and according to local folklore it was used down through the ages for its healing and therapeutic properties.

Sea Salt
Most table salts are highly processed and laden with anti-caking agents (some sea salts use anti-caking agents as well), and they are usually stripped of their naturally occurring trace elements. The Sea Salt used in Ishga products, on the other hand, is a pure, natural, unrefined salt which retains over sixty naturally occurring trace elements such as potassium, calcium, magnesium and zinc. All of which are essential for good health and wellbeing.
The sea salt used is hand harvested using the simplest of recipes; Sea Water, heat and time – creating pure white crunchy sea salt flakes, ideal for use in our sea salt scrub.

Example of the Isgha products. The Ishga candle with its active ingredients can also be used for massaging the skin.

BEFORE AND AFTER PHOTO

The Ishga products have shown to be very healing for conditions such as psoriasis and eczema, with results in just under three to four weeks. 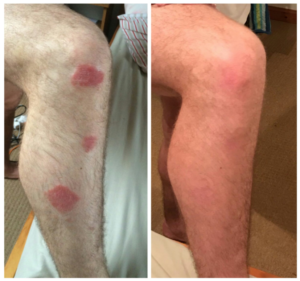